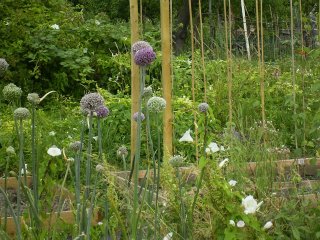 The leeks have thrown up flowers so I cut them all and then took them home and put them in a vase. I suppose I should have really waited and saved the seed but so far I haven't got into the seed saving lark - perhaps I will when time is not so limited, I am struggling to keep on top of the weeds and sow the things I should be - never mind next year will be different...... 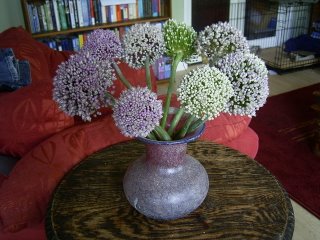 I have managed to get to the plot quite a bit over the past few days.

I have sowed some mizuna, giant mustard leaves, salad bowl lettuce and 3 rows of radishes.

Planted leeks, sprouting broccoli, brussels sprouts, kale and chard. I know it is late for some of the seedlings but I recon if I water and feed them well they might be alright. I also transplanted some rhubarb and put it into the the bed where the garlic was and the rhubarb that I transplanted last year. If I had not moved it it would have been doomed as it was growing next to the shed that is due for demolishing. I split up the crowns planted them spread tou more, put some pelleted chicken manure around them and watered them well so hopefully they will be happier than they were and produce lots of lovely rhubarb next year. 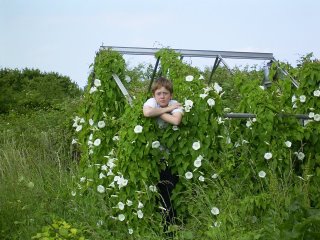 A picture of my son modelling the new topiary greenhouse - You've got to give the bindweed something to do - I thought it should be creative - best of all I didn't have to do anything!

Posted by Emma Kitteridge at 6:13 pm No comments: 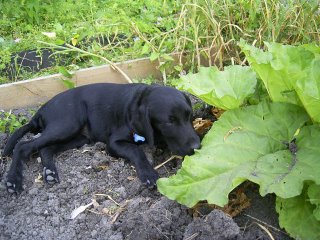 Look what I found in the rhubarb patch!

Buddy seemed to think this was the place to be after I had removed all the garlic bulbs. They all got rust but I cut all the leaves off and took the outer layers of leaf from round the bulbs and they look ok. Hopefully they will store well. 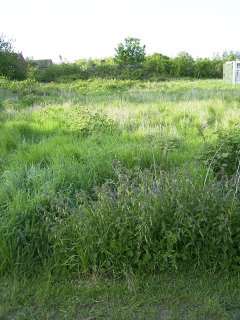 We have had our main plot for a year now.

This is what the plot looked like in May 2005 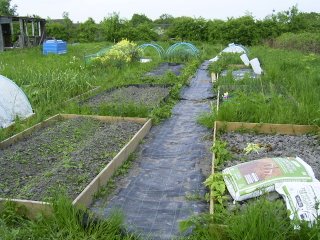 And this is what it looked like one year on

Posted by Emma Kitteridge at 6:11 pm No comments: 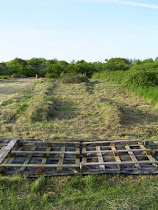